At $1.62 Billion, Christie’s Visionary: The Paul G. Allen Collection Sets Record For The Most Valuable Sale In Auction History 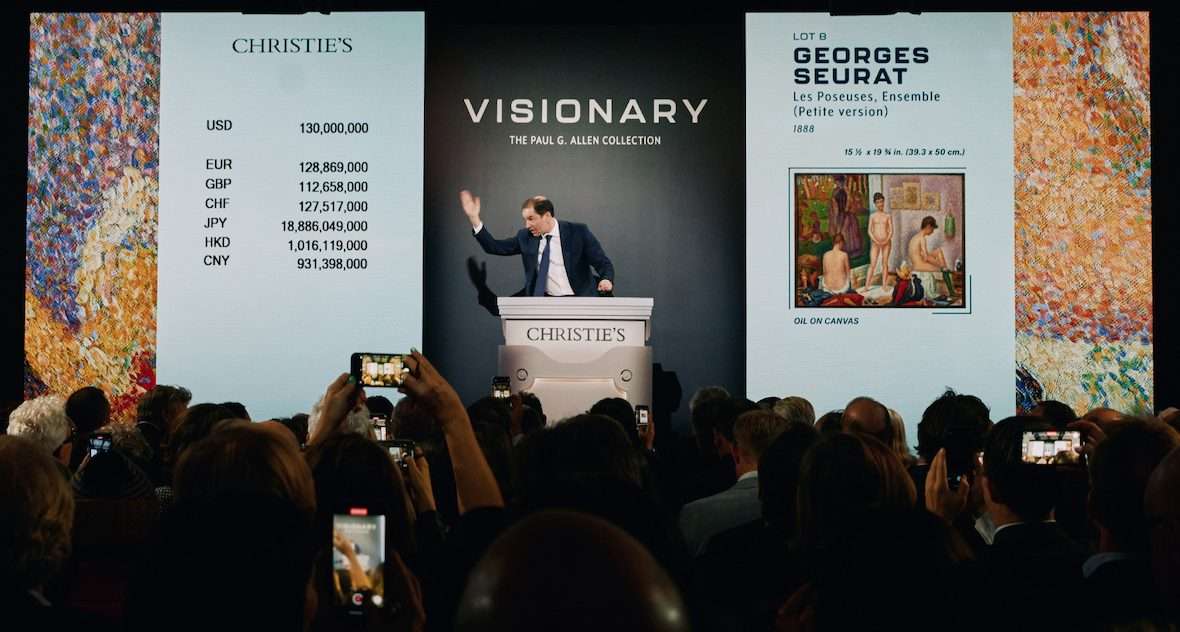 Over two extraordinary days last week, Christie’s conducted the largest art auction in history, selling the unparalleled art collection of Paul G. Allen, the late philanthropist and co-founder of Microsoft. When the final hammer came down on Nov. 10, Visionary: The Paul G. Allen Collection had shattered the record for the most valuable auction of all time, achieving $1.5 billion in a single evening and a staggering $1.62 billion in aggregate. All of the estate’s proceeds from the sale will be dedicated to philanthropy, pursuant to Mr. Allen’s wishes.

The sale included 155 works spanning a period of 500 years. Bidders from around the globe participated live in New York City, as well as by phone and online. The auction was 100% sold, and the $1.62 billion total was well in excess of the pre-auction estimate.

The sale was a series of record-breaking highlights, including five paintings that sold for over $100 million. Georges Seurat’s famed Les Poseuses, Ensemble (Petite version) led all lots with a winning bid of $149,240,000. Other works that sold for more than $100 million include Paul Cézanne’s La Montagne Sainte-Victoire, which brought $137,790,000; Vincent van Gogh’s Verger Avec Cyprés, which sold for $117,180,000; Paul Gauguin’s Maternité II, which sold for $105,730,000; and Gustav Klimt’s Birch Forest, which brought $104,585,000. In all, an astonishing 27 records were established over the two sales.

The event continued a record-breaking year for Christie’s. In May, the auction house sold Shot Sage Blue Marilyn, Andy Warhol’s revered 1964 silk-screen of Marilyn Monroe, for more than $195 million, the highest price ever achieved at auction for a 20th century work of art. Christie’s also holds the record for the most expensive painting ever sold at auction, Leonardo da Vinci’s Salvator Mundi, which fetched $450.3 million in 2017. Other record sales include the highest price for a work by a living artist (Jeff Koons’ Rabbit, 2019) and the highest price for the sale of a digital work of art (Beeple’s Everydays, 2021).