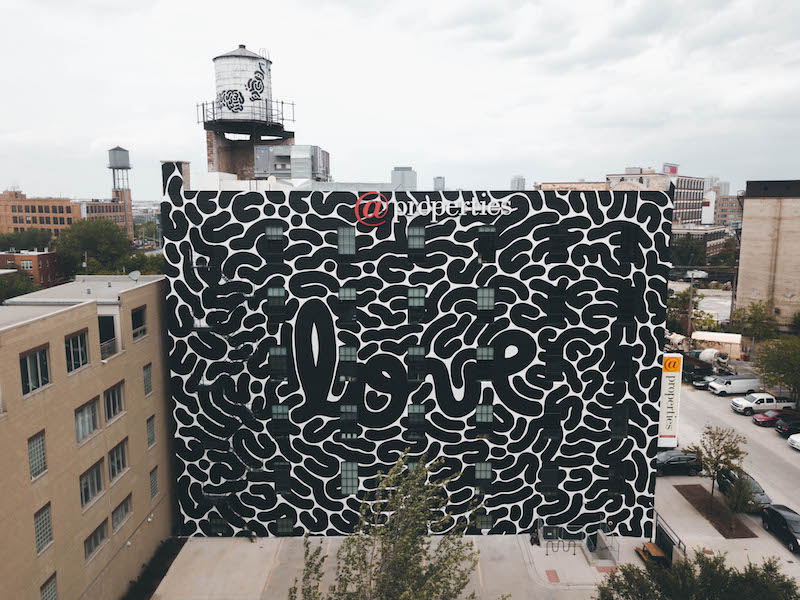 It’s no secret that @properties loves supporting Chicago artists. Over the years, we’ve collaborated with a number of well-known names in the art community including Hebru Brantley, Dwight White, Marc Hauser, and Matthew Hoffman (the creator of @properties’ signature Love script). Today we are excited to announce we’ve teamed up with internationally recognized artist Lefty Out There to unveil a six-story mural in Chicago’s River West neighborhood.

Featuring the Love script, the 70-foot-tall by 100-foot-wide mural at 806 N. Peoria St. is the largest work ever created by Lefty Out There (AKA Franco Campanella). The Chicago native is known for his signature squiggles (polymorphs) and marks, which have earned him recognition by brands like Nike, Red Bull, Effen Vodka, and Nobu, and have spanned out across Europe, the U.S. and Asia.

The mural took six months to plan and nearly a week to execute, requiring the use of an aerial lift – a first for the artist. Lefty and his two team members worked daringly to create the signature design from as high as 70 feet in the air. Prominently located one block west of the corner of Chicago and Halsted, the mural is visible from both the street and Metra’s UP North and UP Northwest commuter train lines.

“Lefty is one of the most exciting artists to come out of Chicago, and we’re thrilled to showcase his work, to bring the Love campaign to life,” said Thad Wong, co-founder and co-CEO of @properties. “As a Chicago company, we have an incredible love for our hometown and look for ways to support the artists that provide the colors and textures that make Chicago such a great place to live.”

Wong and @properties co-founder and co-CEO Mike Golden dreamt up the Love campaign as part of a mission to spread positivity and connect with Chicago neighborhoods. For the story behind the campaign, check out this Q&A.

Feature image by Lefty Out There and team