10 Things We Love About Lincoln Park 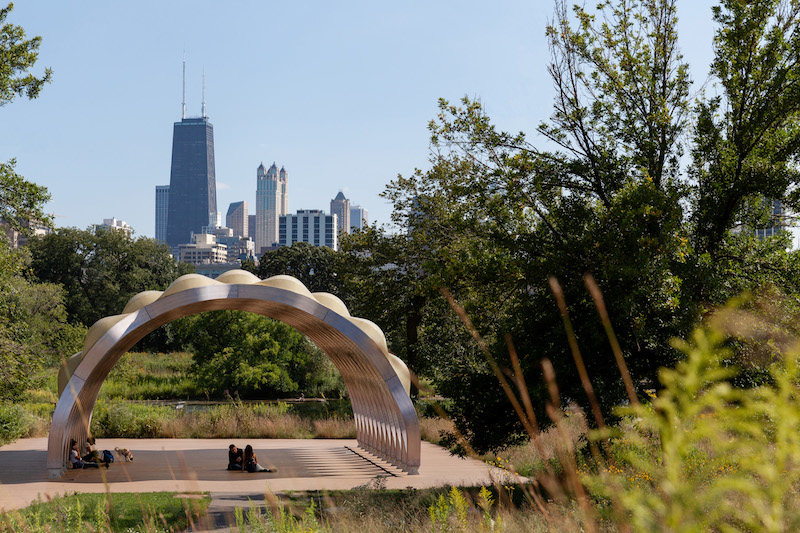 With roots tracing back to Chicago’s earliest years, Lincoln Park has always played a leading role in the city’s entertainment, higher education, and civic institutions. Its stretch of lakefront, which prominently features its namesake park, includes many attractions such as the Lincoln Park Zoo and Lincoln Park Conservatory, among many others, and is as bustling as the busy retail and commercial corridors that cross through the neighborhood.

But there’s also a balance, with an emphasis placed on nature and the outdoors at many of Lincoln Park’s best known attractions and amenities. And for lovers of all things Chicago, there’s a plethora of cheap dives and high-end dining to explore all flavors of the city. Home to thousands of college students as well as long-established, multi-generational families, Lincoln Park is not only a North Side anchor, but a place that people from all walks of life call home. Here are just a few things that we love about Lincoln Park.

With free entry every single day of the year, including holidays, the 35-acre Lincoln Park Zoo shows unwavering dedication to its mission to educate and entertain Illinois residents. And having been in operation for more than 150 years, the attraction is noted as being the second oldest zoo in the country (New York’s Central Park Zoo opened just four years prior in 1864). With over 1,000 animals from around the world, there is enough to see and do for an entire day. And it’s not all just for kids — the Adults Night Out events, winter ZooLights lighting display, and Zoo Year’s Eve celebration are popular draws for grownups. The honeycomb-shaped nature boardwalk designed by Chicago’s Studio Gang is also a must-see. 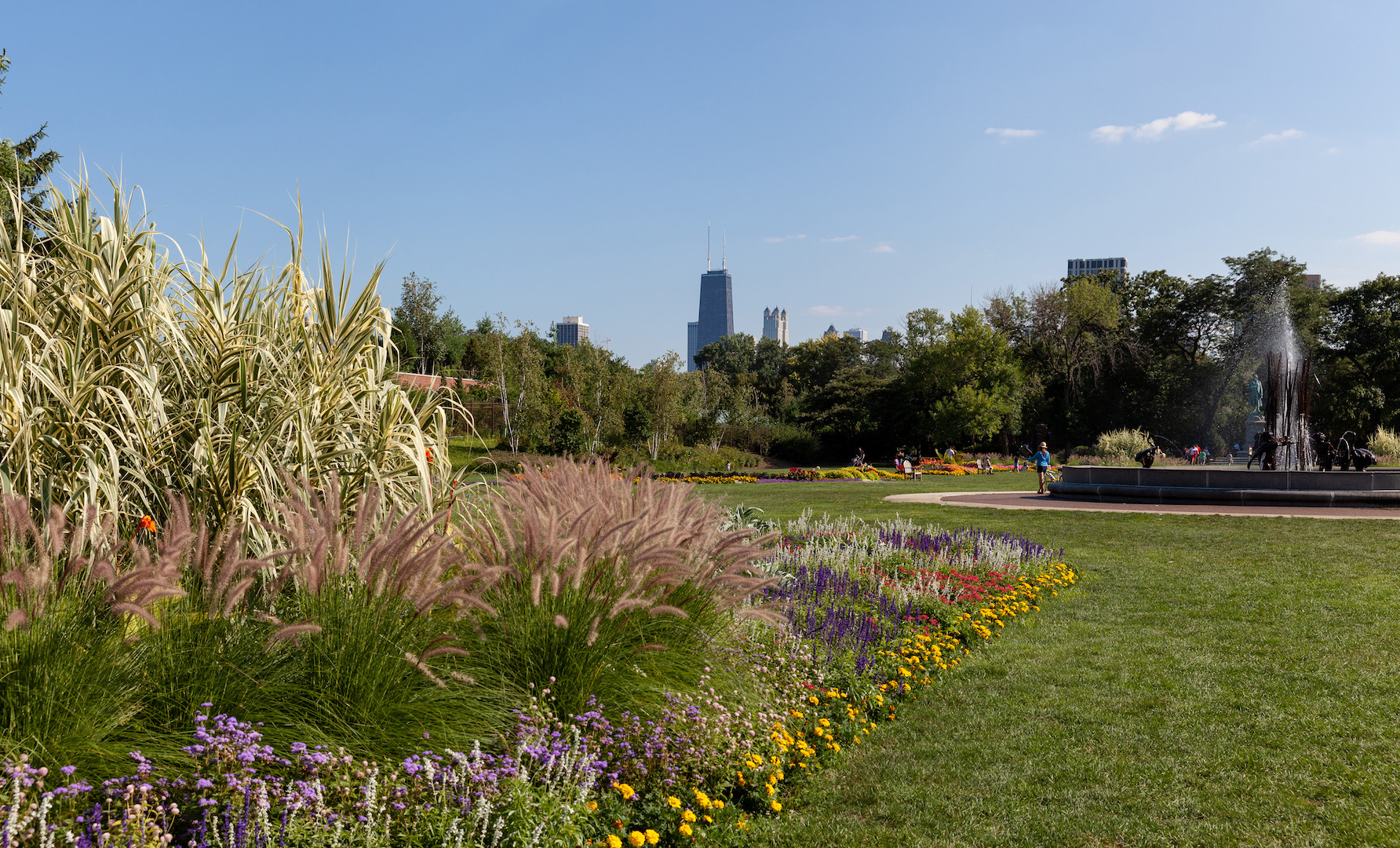 Further bolstering the neighborhood’s naturalist credentials are the Lincoln Park Conservatory and the Peggy Notebaert Nature Museum, which are both located due north of the Lincoln Park Zoo. For a small admission fee, visitors to the Peggy Notebaert can learn about the Chicago area’s natural history and get an up close and personal look at hundreds of live butterflies in the Judy Istock Butterfly Haven. And for those looking to get a breath of fresh air or study flora from around the world, the Victorian-era Lincoln Park Conservatory greenhouse is free to the public.

Located directly off busy Fullerton Parkway and near the even busier Lake Shore Drive, this small three-acre pocket offers a serene escape from the hustle and bustle of city life. It’s also a destination of significant architectural merit, with a listing on the U.S. National Register of Historic Places and official Chicago Landmark designation. The Prairie School era pavilion and rock features are a perfect spot to relax, but have also become a popular site for weddings and engagement photo shoots. Operated by the Lincoln Park Conservatory, this small retreat draws on an appreciation for both the natural and manmade world and blends them world into one. 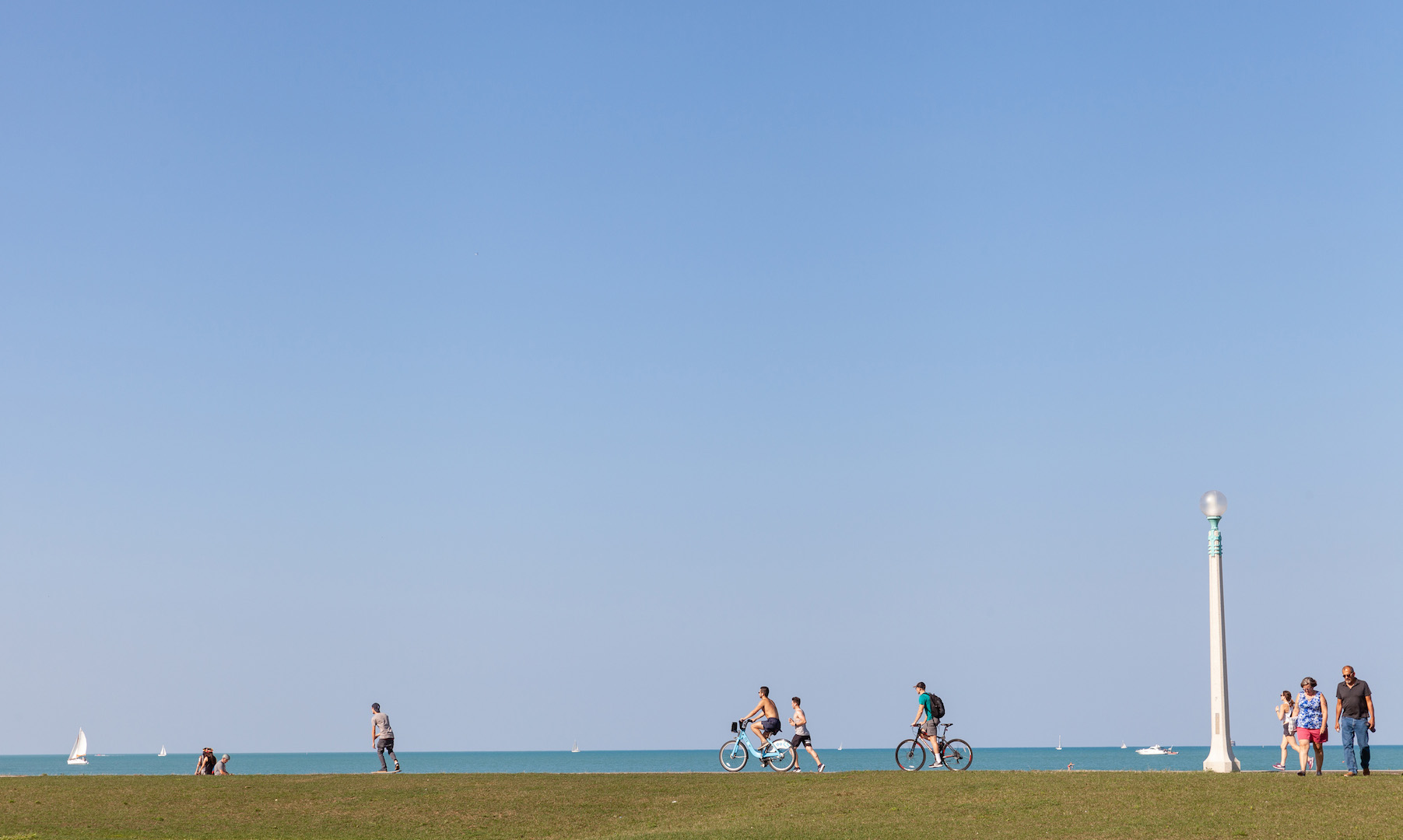 One thing that many first-time visitors to Chicago often note is just how truly massive Lake Michigan is. To some, it’s hard to believe that it’s a freshwater body and not an ocean (hence Chicago’s “third coast” moniker). But similar to our coastal peers, Chicago has sprawling sandy beaches that residents crowd in on during the hot and humid summer months. One of the larger public beaches on the North Side, this popular stretch (which is technically a part of the broader North Avenue Beach) became even bigger after the recent completion of a massive civil engineering effort which reclaimed nearly six acres of new park space from Lake Michigan. 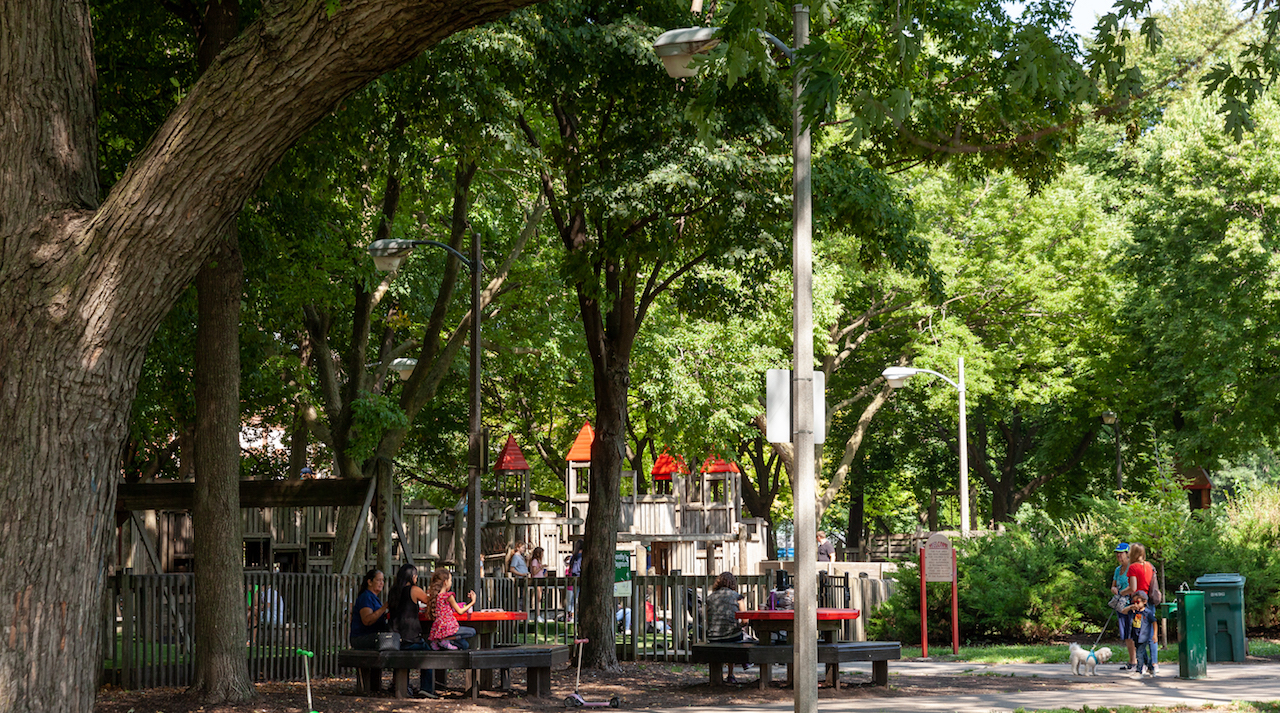 Passersby with a keen eye will notice sculptures located around the park’s edge of some familiar characters: there’s the Tin Man, the Scarecrow, the Cowardly Lion, and of course, Dorothy and Toto. Yes, this park is named after that “Oz,” the one imagined by noted Chicago reporter and author L. Frank Baum. But it’s the 13-acre park’s recreation offerings — including an athletic field, tennis courts, basketball courts, and the aptly dubbed “Dorothy’s Playlot” children’s playground — that draws in nearby residents.

With an undergraduate enrollment of nearly 15,000 students, DePaul is the largest private, not-for-profit university in the Midwest. This growth has been expressed through a steady expansion of its Lincoln Park campus and the construction of architecturally notable new buildings for its theater and music schools. Known for its highly diverse student body, the university adds a feeling of vibrancy and youthful enthusiasm to the already prestigious Lincoln Park neighborhood. 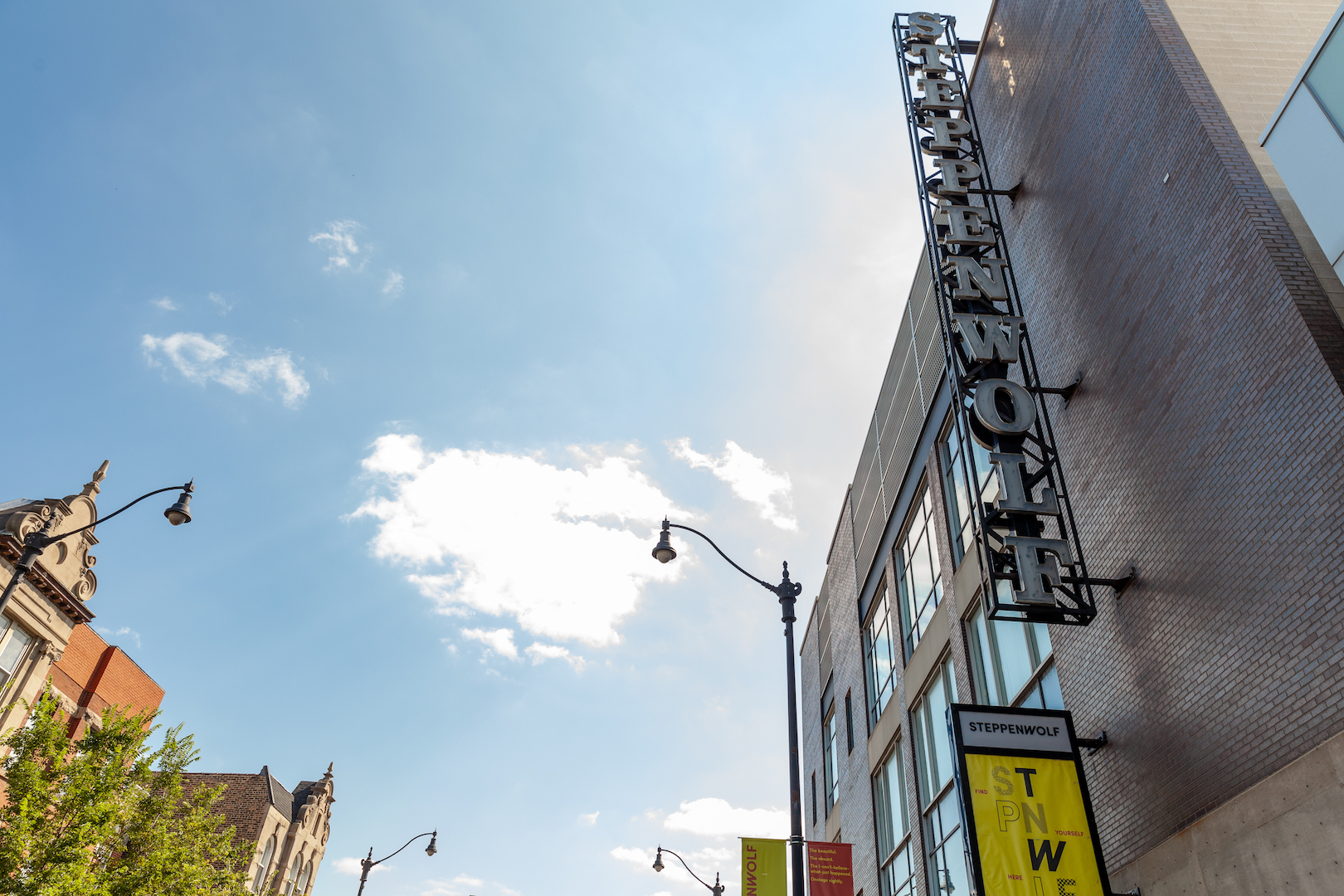 During the ‘80s and ‘90s, Lincoln Park’s Halsted Street played an important role in the reinvention and revitalization of Blues in popular music. The legendary Kingston Mines and B.L.U.E.S. venues remain, but in more recent years, the renovation of the Biograph Theater for stage productions and the old Three Penny Cinema’s rebirth as Lincoln Hall has brought new life and energy to the once sleepy stretch of Lincoln Avenue. Further south on Halsted is the highly influential Steppenwolf Theatre Company, which has long served as a launching pad for acclaimed stage and film actors. 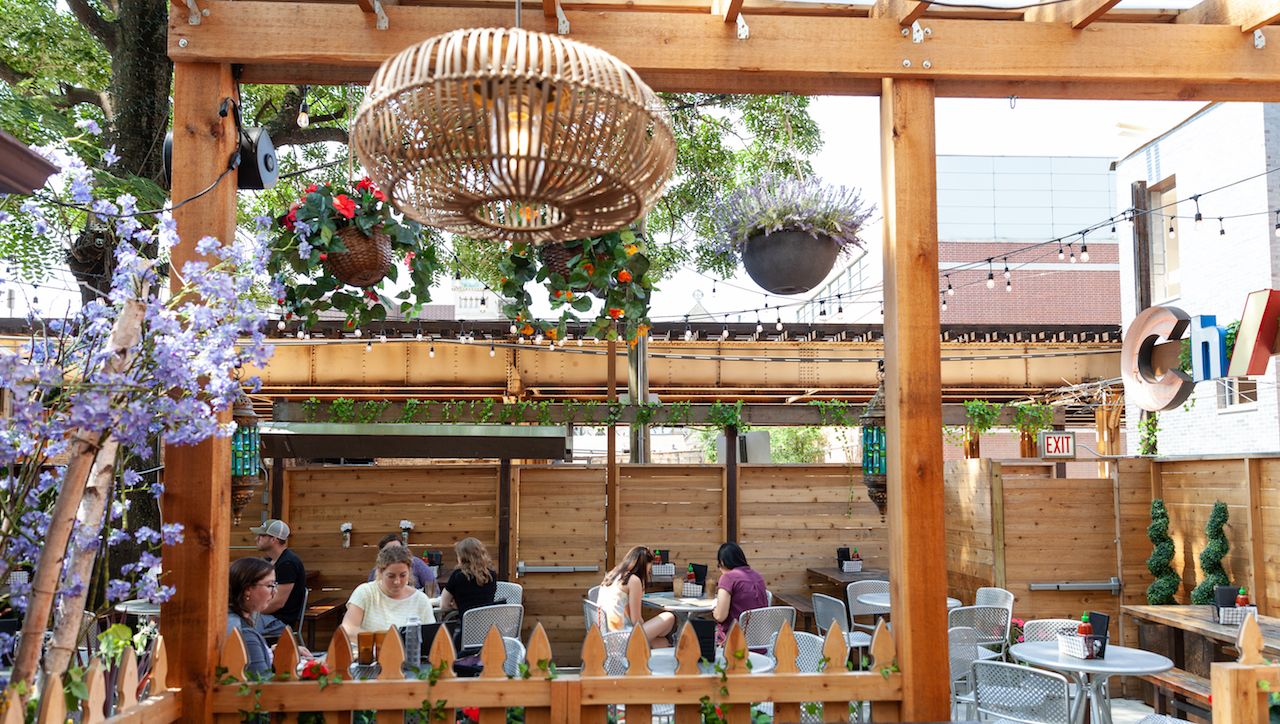 From dingy dive bars to Michelin-star dining and everything in between, Lincoln Park is known for its eclectic variety of food and nightlife options. Established cheap eats such as Pequod’s Pizza and The Wiener’s Circle are popular with the late night crowds and DePaul students, while the farm-to-table North Pond and chef-driven Alinea attract dedicated (and deep-pocketed) foodies. Expect sports bars and Irish pubs to be packed during Cubs games.

Lincoln Park’s reputation as a high-end neighborhood isn’t a coincidence. With a close proximity to Chicago’s tony Gold Coast, Lincoln Park transformed into a pricey lakefront pocket during the early decades of the twentieth century. Much of this early residential architecture, including stately Victorian-era mansions and limestone-clad multi-family flats, can be seen today in the Sheffield Historic District.

Take a deeper look into Chicago’s past at the Chicago History Museum, located on the southern edge of Lincoln Park near the lakefront. From early relics from Chicago’s industrial roots to highlighting the narratives of Chicago’s immigrant communities, this institution not only collects and catalogs historic items, but seeks to tell the story of our fascinating city within context. Engaging permanent exhibitions such as The Fifth Star Challenge and Chicago: Crosswords of America provide interactive fun and education.