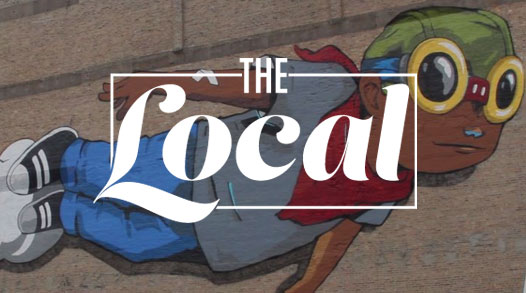 No matter where you go in the city – from the Far North Side in Andersonville all the way down to Pullman and west to Garfield Park, art is everywhere: murals on the sides of buildings; industrial sculptures tucked away down alleys; paintings on the walls of trendy restaurants; and, of course, works in galleries and in our world-renowned museums like the Art Institute and the Museum of Contemporary Art. For our latest installment of The Local, we explored art in three city neighborhoods: the West Loop, South Loop and Andersonville.

The West Loop has a rich history as an artist’s haven dating back to the 1980s when artists set up shop in the neighborhood’s many loft buildings, which offered large, inexpensive live-work spaces. More recently, with the explosion of new restaurants, bars and condo developments, higher-end galleries have moved into the area. We spoke with Rashelle Roos, who combines her love of Arabic script and graffiti tags with the grit and the glitz of the West Loop to create her paintings. Her good friend, Franklin Riley, an artist and owner of Fulton Market Gallery, has lived and worked in the neighborhood for about seven years and loves what’s happening here. He’s also the curator for Fulton Market Kitchen, a newer restaurant at the corner of Sangamon and Wayman, one block north of Fulton, which doubles as a gallery. On display are works by a number of local and national artists, including Erik DeBat, Erni Vales and rising local artist, Chadwick. But you don’t have to visit a gallery or restaurant to see great art in the West Loop. Just drive around the neighborhood and discover cool murals — on Racine at Lake, on the Soho House building, everywhere.

Over in the South Loop, Mark Kelly from Columbia College is helping turn the neighborhood into a living, breathing canvas. He heads up the Wabash Arts Corridor, which is taking huge blank walls on numerous buildings along Wabash Avenue and other streets nearby and commissioning artists – Hebru Brantley, Never 2501, Shepard Fairey and more — to install massive murals. These projects are transforming the area into a walking gallery open to all. Former Columbia student Don’t Fret, whose unmistakable, roughly drawn characters have been spotted all over the city, painted a mural in an alley in the Loop (it’s across the street from the Palmer House) and will soon start working on a huge piece along Wabash. Watch for it.

Finally, if you’ve ever felt a little down and someone handed you a “You Are Beautiful” sticker, you can thank artist Matthew Hoffman for cheering you up. Hoffman started sharing the message via stickers in 2002 and it quickly became a global phenomenon. They just printed their 2 millionth sticker set, but he has also installed “You Are Beautiful” signs around the city. Four of them grace fences, walls and sign posts in the Far North Side Andersonville neighborhood. As you drive up Clark or down Foster, you’ll see them. And you’ll likely smile. If you see great art around the city, take a photo and share it with us. We’d love to see what you see.

Written by @properties
@properties is one of the top 10 brokerage firms in the nation. The company also owns Christie's International Real Estate, the world’s premier luxury real estate brand and network with affiliates in nearly 50 countries. No matter your real estate needs, we've got you covered.